Go Directly To Rewards
Welcome to the PledgeManager for Greenskull Castle - Miniatures!
If you missed our campaign, don't dismay! Just choose an option below.

“There were a dozen of the fiercest goblins you could imagine, but these were no simple troop of goblins. They were the most notorious, vicious and deadly lot you could ever have the dreaded misfortune to encounter.

I would have gladly faced an army of 1,000 men single-handed than dealt with this horde.”

Hello everyone, Marco and Vittorio here. Greenskull Castle is our first Kickstarter campaign. Our goal is to produce a goblins clan, developed by our new brand Emvicreative. You might know us under the name Terrible Kids Stuff.

It was the 56th day of lockdown, it was a foggy evening, and after the latest mushroom pizza, Marco began to sketch uncontrolled... a standard-bearer goblin was born.

Amazed by the sketch, we whatsapped it to our long time friend Lukasz... Snikt the standard-bearer is alive!

Greenskull Castle is a fantasy miniatures range sculpted in 32mm, our first experience in this scale. It’s an exciting and ambitious challenge for us, and we jumped right into it. It’s now Your turn to help us bring this project to life. Get ready to enter the dungeon of the castle, searching for hidden treasures and much more!

Marco drew digitally the core set miniatures using the Procreate software. Each character has unique and curated details from his own class.

Lukasz sculpted digitally all miniatures using the ZBrush software. His support has been very important in every step of the development of the campaign, bringing to life exactly what we had in mind.

Vittorio has been in charge of the 3D printing of the sculptures using our own SolusPro by Reify, which gave us the opportunity to work on the tiniest details.

Massimiliano took care of the cleaning of the supports and the quality control of the joints. He overlooked that every single component was exactly the same as per the 3D sculpture.

Ciprian Negut, one of the best experts in the field, produced the resin cast. He did such an unbelievable job in positioning each joint, that did not require a heavy cleaning of the miniatures before the assembly.

We studied the best way to cut and match each piece in order to make the assembly as easy as possible, without losing details and quality.

Below you can see a picture of our goblin in between three miniatures from other well known brands. We’d like to show you the true to size height. We paid a lot of attention to the body and muscles ratio of each class.

All miniatures will be delivered not assembled and not painted, sealed in plastic bags, within a linen bag closed by a string.

The entire clan is made of 15 goblins in 32mm scale, divided by 3 groups of 5 goblins each: Warrior, Wise and Craftsman. You can see below the entire group.

“There were a dozen of the fiercest goblins you could imagine,” the old man was saying. I sat near his bedside, listening to the tale of a goblin horde and the men who tried to hold them at bay.

I was cleaning his chamber floors, scrubbing away a week’s worth of dirty footprints and crumbs of food when he noticed my sidelong glance at his leg. It was the first time I’d seen him without the wooden prosthetic.

I flinched and looked away, embarrassed by my own impertinence.

“Curious about my leg, are you?”

I nodded a little reluctantly. I was, truthfully, eager to hear the tale.

“Well then, sit boy and stop your fidgeting. Best you hear it from me before you start believing in rumors.”

He’d only been in the citadel a week, but I’d already heard the gossip. The cook’s boy said a giant bear had tried to eat him. The guard at the front gates said he caught his leg in the anchor winch of a pirate ship. The Grand Maester’s maid told me that he’d cheated on his wife and she’d cut it off in a jealous rage.  I thought her story was probably the closest, considering how the old man leered at the maids and even the cook.

This campaign would not exist without the team effort. We received such amazing support from several friends we’d like to thank. Each one of them brought his own expertise, and they dedicated their precious time, believing in this project and in us. In particular we’d like to thank:

One standard miniature of your choice from the core set. 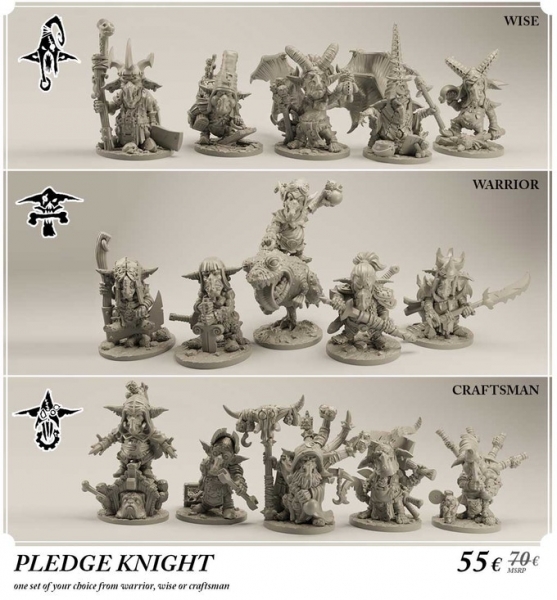 One set of your choice from: Warrior, Wise or Craftsman. Each set is composed of 5 miniatures.

One last step to go!

Share your email, we will send you an invite!

If you're already have a PledgeManager account from another project, just sign in using the button below to join the project.

Complete your information below and we will send you an email to get started!